November 28th, 2016 is a date that will be long remembered in the town of Gatlinburg, Tennessee. As the town was returning to work after the Thanksgiving holiday, wind driven sparks from a neighboring fire (the Chimney Tops 2 fire, first reported on November 23rd) landed in the Gatlinburg area and ignited quickly, thanks to high winds and low humidity. What had become known as the 2016 Great Smoky Mountains wildfires rapidly consumed nearly 18,000 acres, claimed 14 lives and injured 134, becoming one of the most devastating natural disasters in Tennessee’s history.

“The fires spread very quickly, so it created a chaotic and scary situation,” remembers Cory Cottongim of Ole Smoky Moonshine. “The fires caused communication issues with some of the cell towers, so many people attempting to warn family and friends in Gatlinburg were frustrated. It all happened very fast. The fires destroyed the homes of 14 of our employees, and many others were displaced since part of Gatlinburg was closed off in the immediate aftermath.”

While Gatlinburg is itself a small town, home to approximately 4,000 people, it is surrounded on three sides by America’s most visited national park, the Great Smoky Mountains National Park, and the town hosts nearly 11 million visitors yearly.

With the town shut down after the destruction of the fires, Ole Smoky Moonshine, Yee Haw Brewing Company, the Gatlinburg Convention and Visitors Bureau and Music City Roots answered the call to help, by organizing and hosting the Mountain Tough Benefit. Held on December 17th, the daylong festival raised money for the town of Gatlinburg and those affected by the devastating blaze.

“We had a really great turnout,” notes Cottongim of the event. “Initially we were worried about the weather which started out unfavorably, but as the day progressed the skies cleared and it was beautiful.”

Artists including the Zac Brown Band, Jim Lauderdale, Sam Bush, Derek St. Holmes, Jason D. Williams, Rob Ickes and Trey Hensley, Randy Kohrs, Sarah Potenza, Moe Pitney and Chelle Rose took the stage from 11 in the morning until ten at night. The benefit, held in a parking lot in downtown Gatlinburg boasted an attendance that was beyond what the sponsors could have hoped. “People were there, shoulder to shoulder, supporting the town,” smiles Cottongim. The Mountain Tough Benefit was a resounding success in getting Gatlinburg back on its feet, but Cottongim notes, there is still a lot of work to be done, and extends this invite: “If you want to help, come visit!”

To make a contribution to the Sevier County Community Fund, visit https://etf.givingfuel.com/sevier-county-community-fund. 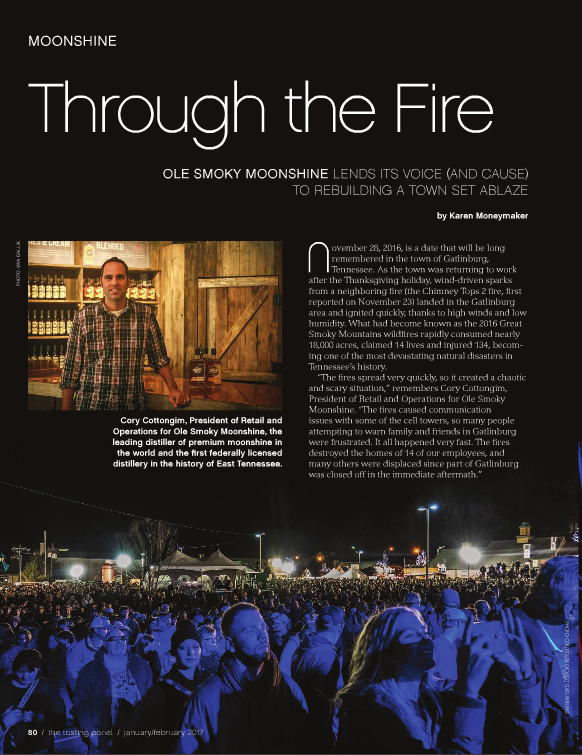