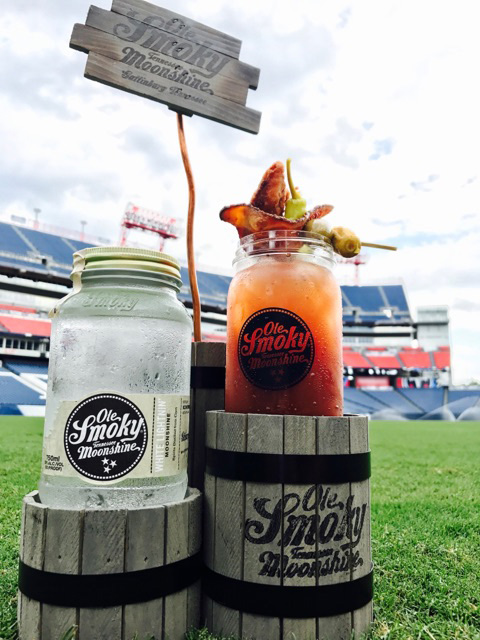 Gatlinburg, TN (September 29, 2017) - Ole Smoky Distillery announced today that they have become an official supporter of the NFL’s Tennessee Titans. Starting with the 2017 season, Ole Smoky will be available throughout Nissan Stadium during each home game.

“Nothing screams Tennessee spirit more than Titans football and Ole Smoky Moonshine,” says Ralph Ockenfels VP of Marketing for the Tennessee Titans. “The state pride we see amongst our fans is remarkable and we are confident they will enjoy sipping on ‘shine during the games.”

With this initiative comes Ole Smoky branding throughout the stadium, signature moonshine cocktails served at multiple bars and availability within suites inside the arena. The featured cocktails include a Bloody Mary, Blackberry Lemonade, Apple Ginger, and Lightnin’ Margarita.  Extending beyond the stadium, Ole Smoky and the Titans will also be featured on in-store point of sale, cocktail features at local establishments and a regional sweepstakes.

“We could not be more excited to work with the Titans,” says Robert Hall CEO of Ole Smoky. “This is the first time Ole Smoky has worked with an NFL team and we foresee great success for the two Tennessee based brands.”

The moonshine company has signed a multi-year contract with the NFL team, which means this fall is just the beginning of many amazing activations.

The Tennessee Titans are one of 32 professional football teams in the National Football League (NFL).  The franchise is based in Nashville, Tennessee and has won more than 400 regular season and postseason games, captured one conference championship, nine division titles and clinched 21 playoff appearances in their history.

The organization began play as the Houston Oilers in 1960 as a charter member of the American Football League, and joined the NFL as part of the AFL-NFL merger in 1970.  The franchise relocated to Tennessee in 1997 and opened a downtown Nashville stadium in 1999.  Later that season, the team made its first appearance in the Super Bowl.  For more information, please visit www.TitansOnline.com.

Ole Smoky is the leading distiller of premium moonshine in the U.S. and the first federally licensed distillery in the history of East Tennessee. The company’s roots can be traced to the early settlers of the Smoky Mountains. Which means this isn’t just moonshine, it’s moonshine made with authenticity and enduring pride of the people of the Tennessee Mountains. In 2009, the law in Tennessee changed and suddenly, it was legal to make, distill and sell the infamous bootlegger’s hooch. It was at that point that a group of families decided to bring their artistry of superior moonshine making to the world at large.

And the world welcomed it. Ole Smoky was named an Impact Hot Brand by M. Shanken Communications, a leading publisher in the U.S. wine & spirits industry. The Hot Brand Award is given to both established and upcoming brands that achieve double-digit growth in each of the past three years, with a minimum of 200,000 cases. Additionally, people from all over the world visit the famed Gatlinburg Distillery, The Holler™, to see and experience how Ole Smoky moonshine is made.

Ole Smoky now retails globally and offers more than twenty creative flavors crafted from authentic family recipes. And while Ole Smoky has long been enjoyed on the porch from the jar or the jug, Ole Smoky now finds itself mixed in handcrafted cocktails of the finest order in establishments across the U.S. including at some of the biggest music and sporting events in the country.

For more information, please visit www.olesmoky.com and find them on social media @olesmoky.